What and how to tell children about divorce

I would personally like to thank the BBC for highlighting the dilemmas and the pain faced by children and parents when the ending of a parental relationship occurs. Their documentary, Mum and Dad Are Splitting Up, aired on BBC 2 last night and offered a real insight into this challenging time. The show can be found on BBC iPlayer until the 12th of September 2013.

The experience of divorce has often been likened to the pain of the grieving process when a friend or loved one dies. Although rather than being able to cherish memories of a loving relationship to its end, there is no such ending and those cherished memories can seem like distant fantasy in the presence of bitterness and conflict. Even in those divorces not involving violence, one person is inevitably ‘the leaver’, and there is always one who is left behind facing an overwhelming sense of rejection.

Regardless of their roles, both will be feeling immensely sad at the loss of what they had hoped would be a long and loving relationship. This sadness will often result in blame and recrimination. Any such reaction will further wound, not only the participants, but primarily the children who are facing what can be terrifying uncertainties, something that no parent would want their child to have to live through.

Regardless of the breakdown of their own relationship, they will have a continuing mutual interest if they can but recognise it – to put their children first, to minimise conflict and to avoid, if at all possible, an enactment out of any conflict in the courts.

Putting children at the centre of thoughts and discussions when adults are going through their own enormous pain is a lot to ask, but absolutely necessary. They are first and foremost parents, whose role is to provide protection, a nurturing environment and to provide for all of the child’s needs. One of the greatest responsibilities they have is to place secondary importance on their personal differences, and focussing primarily on how to unite to agree the best way for the children to negotiate such a painful process themselves.

The need to avoid exposing children to direct conflict between adults is obvious, but engrossed in their own hurt, parents may choose to act in such a way that can portray themselves as victim to the behaviour of the other party, passing on the blame and responsibility of the relationship to the other, or to in some form enlist the loyalty of the children. That is as damaging as exposing the children to open conflict.

The reality is that no one seeks a divorce lightly, if you are unlucky enough to go through it, it will likely be one of the worst experiences of your life.

If, however, the decision has been reached then parents still do have a real choice as to how they will help or hinder their children through what will be a life transformation.

If direct communication between parents has become difficult, as often happens, then involving a professional solicitor as a mediator or as part of the collaborative law process can bridge the gap, and make what seems to be impossible achievable.

What can parents do to ease the pain for their children? 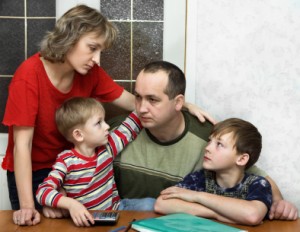 1. Remember it’s never about scoring points, this should not figure as a goal in the language of any parent. Children don’t want to take sides, or feel under any pressure to do so.

2. Children need the continued love of both parents, it’s the job of each to ensure that the child’s relationship with the other is intact and is not damaged in any way by what is said or done.

3. Children need the emotional permission of both parents to love the other, which is incredibly hard when there is such hurt around. Easy to say, so very hard in practice. If parents are finding it hard, they may need the support of a professional to help them make sense of their situation. Ultimately, that’s exactly what the children need too – to be able to make sense of a world that may be crashing down around them.

4. Children, depending on their ages, need clear ideas, but above all to know that although there may be some changes ahead, mum and dad WILL make sure that they will all be ok. Practical questions about homes and schools can be completely answered by a confident assertion that mum and dad will be able to sort it out. The children’s trust in their parents as parents will have taken a battering, but now is the time to show them that whilst all of the answers are not immediately apparent, the parents will want to know what they are worried about, so that they can talk and find a solution to every question. As the Documentary emphasized, parents should convey that they will always be loved by both of them, and that the ending of their relationship is nothing to do with what the children have done, nor will it affect the fact that they are parents for life.

5. Children can be told honestly about both the sadness that each of the parents have in ending their relationship but also their continuing joint determination that their children will come first. It’s ok to cry, for parents and children, that is part of the grieving process. What is needed is a clear message delivered compassionately which will help them negotiate the path through the process, allowing and coping with expressions of anger, denial, bargaining, and sadness, because that grieving process is the path to healing.

Children know when they are not being told the truth. It usually backfires. There are ways of expressing information that informs yet also supports and protects, and whilst parents may not have been taught those skills in school, now is the time for them to put their parenting experience to best effect.

Hartnell Chanot & Partners have always sought to ensure that any children are placed at the heart of any discussions. We have produced an free online guide titled How to tell children about divorce, which offers tips and advice based on our many years of work in this field.