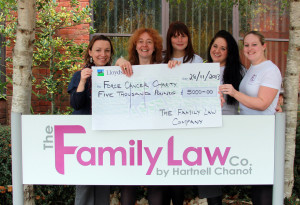 The charity team from The Family Law Company hand over a cheque for £5,000 to Naomi Cole of FORCE.

Jane Chanot, Director, was keen to praise the team that were involved in raising the total: “I have to thank the members of our Charity Team, who have worked tirelessly to deliver a programme of successful activities alongside their full-time jobs. This has been a real team effort, every member of staff was given the chance to vote for our charity of the year and FORCE were stand-out winners.”

Members of The Family Law Company’s Charity Team were on hand to present Naomi Cole of FORCE with the cheque.

FORCE Cancer charity is a Devon-based organisation that has spent the last 26 years making a real contribution to local cancer research, improving treatment, and since 1997 has been offering professional support and information to anyone affected by cancer. The charity is driven by the ethos that anyone with cancer deserves the best possible treatment and support close to home.

The success of FORCE lies in fantastic local fund-raising and voluntary support. Over £12 million has been raised since 1987, allowing the charity to serve the rapidly-changing world of cancer services at a local level.  FORCE is also unique in that it works locally in three areas; cancer research, cancer support and the provision of state of the art equipment.

Last year FORCE completed an extension to the Support Centre thanks to tremendous backing from local fund-raising and several generous grants and donations.  The extra accommodation will help meet the ever-increasing demand on services and allow for the development of new programmes.

In addition to helping support patients and their families, FORCE is still involved with cancer research based in the Peninsula Medical School. Current projects are focussing on lung and ovarian cancers.

Naomi highlighted the importance of the support that FORCE receives from the local community: “None of our projects would be possible without the backing of the local community who volunteer and raise much-needed funds.   All the charity’s funds come from voluntary contributions, ‘Friends of FORCE groups, fund-raising events, legacies, donations, grants and the award-winning FORCE charity shop in Heavitree.”