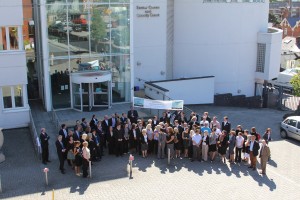 Lawyers across England and Wales are planning a nationwide moment of unity to express their genuine concern and alarm at the Government’s plan to cut criminal legal aid to the point where the long-term effects could have devastating and irreversible consequences.

Solicitors and barristers paused for a minute of unity at 9.59am on 4th June, before Court proceedings commence, to draw attention to the cuts, which will result in an inevitable reduction in the quality of legal services in England and Wales. The Law Society is supporting this move, which has been organised by Rachel Bentley, a Duty Solicitor and partner with Exeter-based law firm Trinity Advocates.

The nationwide action is aimed to draw the public’s attention to the risks inherent in the Government’s approach, which would destroy the justice system and leave defendants, the police and the courts – and ultimately the taxpayer – paying a far higher price.

Law Society Chief Executive Desmond Hudson said: “This one minute of action will draw attention to these government plans which we believe are unworkable, and possibly unlawful.”

Criminal legal aid lawyers will come face-to-face with lord chancellor Chris Grayling in the second of two meetings secured by the Law Society for its members on Monday, May 20th. Solicitors will express their opposition to the government’s proposals for price-competitive tendering (PCT), a system of tendering based on price, which could have devastating and irreversible consequences, coupled with the planned removal of choice of lawyer for defendants.

Release courtesy of The Law Society