How to Tell Your Children About Divorce 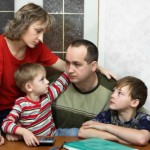 For parents the task of telling their children about their intentions to separate is painful and difficult. As adults, parents have already worked their way through the decision to separate or divorce. The children are only just starting on a journey that their parents may have already more or less completed. It can come as a great shock to them even if they have already suspected that it may happen.

It is necessary to look at each child as an individual as you as parents will know them best.

It is not their fault

Many children believe it is their fault when their parents separate. Children should be told that it is not their fault. This cannot be said often enough. It is particularly important with younger children who live in a word that is part reality and part fantasy. They can easily believe that something that they have done may have caused one of their parents to leave. They may also believe that they can solve the problems in your relationship by being good or by tidying their rooms.

Tell them what is happening

Listen to your children

One of the greatest problems for children when parents split up is accepting a situation and new arrangements that they feel they have no say in. Children want to be consulted about decisions affecting them and they want to be listened to. However, they do not want to have ultimate responsibility for decision making. Children understand fairness and the difference between giving input and making decisions. Some children may not want to be included in your decision making.

You may feel that by talking to your child or children about these things that you will give them too much power. You can sit down and listen to them and hear what they want while making it clear that they cannot get everything they want. This makes them feel involved and important which will make them feel much better. Remember that when you were together as a family you included your children in decision making about lots of things. They will expect you to include them now even if it is difficult.

Don’t fight in front of the children

Children are most distressed when the fight is about them. Fighting in front of the children or saying hurtful things about the other person hurts them. When you put each other down you put your children down as well. Remember your conflict can be very damaging to your children.

Tell them at home if possible

Being at home will feel safer for the children. If they are upset they can show their emotions. If you are away from home your task and theirs is much more difficult. Think about how you can create the difficult emotional and practical space to do this. Remember to be readily available at all times for delayed reactions.

Allow children to express their emotions

It can be tears, anger, pleading, promises or good behaviour, fear, bravado and denial. Do not intervene. Tell the child you understand and that you know that it does hurt but you will try to help them so that it hurts less. Be clear that what has happened has not been because of them but a decision that has been made between the two of you.

Don’t retract because they may cry. This is likely to cause more pain later on because you set up false expectations that cannot be realised and it only prolongs the hurt. It is important to be reassuring without making unrealistic promises. This is a very difficult task for parents. We never want to feel that we have deliberately upset our children. Think about what your child or children are able to understand at this stage too. They are not adults and their perceptions and understanding is at a different stage.

If one of you is going to move out

It often helps to involve children in any such move. Show them where the person moving out is going to be moving to and where their future room will be when they visit. Show them the kitchen and living room. Children worry about the wellbeing of the non-resident parent. Will that parent have enough to eat, where will that parent sleep and will they be alright? By involving them they can feel reassured and also feel they are actively participating. Sometimes this is not possible because the other parent is moving away. If this is the case, if you know what the visiting arrangements will be, tell them jointly so they feel reassured that they will be seeing each parent regularly.

The most important aspect in telling the children is to recognise their need for security and the opportunity to express themselves and their feelings in whatever way they feel able. This may vary greatly from extreme anger to complete violence.

Most important of all reassure children that you will both go on being their parents. You will always be their mother and father and the fact that you and the other parent are unable to get on well together anymore does not in any way alter your feelings for them. They are your children and your love for them will always remain the same.

What you have now to embark upon is extremely difficult for yourselves as a parent and very painful for all of you. In facing up to it try to remember that many parents have had to do this before. If it is done with love and care by the two of you together the children can survive without too much damage. This is provided you follow it up with the same long time love, care and consideration for your children as parents outside your own relationship as you did when you were partners.