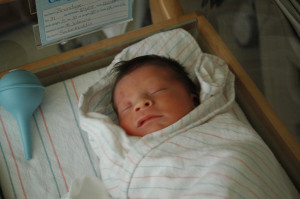 A new born baby has become the first child in Canada to have three parents named on its birth certificate – and an Exeter based firm of family law solicitors has said it may not be long before we see something similar happen in the UK.

The Family Law Company has said it may soon be possible for three parents to be registered on a child’s birth certificate, if government attitudes toward lesbian, gay, bisexual and transgender (LGBT) people continue to change.

The National Crime Agency has this week launched a new service for those exploring their sexuality and gender in the midst of fears they may be at risk when doing so online.

Now with LGBT relationships becoming ever more recognised it may soon be possible for a child to have three official parents.

Three-month-old Vancouver baby Della Wolf Kangro Wiley Richards made the news this week when she became the first child in Canada to have three parents named on her birth certificate, following new legislation in the province which allows up to four legal parents.

Baby Della is the legal daughter of a lesbian couple and their male friend. When Anna Richards and wife Danielle Wiley decided to have a child they agreed they wished to have a father figure in their child’s life, rather than an anonymous donor and recruited long-time friend Shawn Kangro.

The three drafted a formal agreement which set out the rules of their new relationship ahead of the pregnancy and agreed Ms Richards and Ms Wiley would be Della’s primary carers, responsible for custody and finances.

Mr Kangro acts as Della’s guardian and has a say in important decisions.

The trio first applied for Della’s birth certificate a month but were unable to do so thanks to a form which didn’t reflect their position. Having now been sent an alternative form the trio are all legally recognised as Della’s parents.

Vanessa Priddis, associate solicitor at The Family Law Company and a Deputy District Judge, said: “At present there is no provision for more than two parents to be named on a child’s birth certificate and as yet English courts are behind their counterparts in other countries.

“However, courts here do and have allowed more than two people to exercise parental responsibility for a child. This gives the same rights as a birth certificate when looking legally at rights of a parent but probably doesn’t meet the emotional needs of the third parent to be recognised on the birth certificate.

“But in the last few years recognition of this possibility has increased and it would appear it will only be a matter of time before either legislation deals with the point or a court is asked to grapple with it.”