Pensions and the Armed Forces 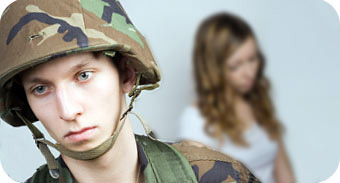 Being based in the South West, we at The Family Law Co frequently find ourselves advising members of the Armed Forces whose marriages have, unfortunately, broken down.

When parties divorce they invariably need to settle their future financial arrangements so that both parties can move forward towards financial independence, with the benefit of certainty and, so far as is possible, security.

Many people assume that their most valuable asset is their home when, in reality, it is often one party’s service pension which is more valuable. Armed Forces pensions are, effectively, gold plated. They give the service man or woman an income for life which those in Civvy Street can often only dream about.

Invariably, the pension benefits include a significant element of widows or widowers benefits which, if the parties divorce, will no longer be available to the former spouse. So we are frequently asked, “How do I hold on to my pension?” and, conversely, “How will I be compensated for my loss”?

The courts have the power to make various orders in relation to a pension asset, including a Pension Sharing Order. Effectively, the Court takes a bite out of the pot of the spouse who has the benefit of the pension and gives it to the non-pension holder.

But, be warned, there are specific rules and restrictions in relation to Armed Forces pensions (as well as the Civil Service and NHS schemes) which those who have less experience of dealing with such pensions may fall foul of. If a spouse has a private pension a Court can effectively give the non-pension owning spouse a share of the pension pot, which that spouse can then use to buy his or her own pension provision, so they can determine with whom the pension is held and when they take their pension benefits.

In contrast, the non-service spouse cannot remove their portion of the pension pot from the armed forces scheme, rather they become a member or shadow member in their own right, but are subject to restrictions which means that they are not allowed to draw down the pension benefit, frequently until they are 65, subject to some exceptions.

There are a number of traps into which the less experienced can fall. There have been a number of changes to the armed forces scheme over the years and so anyone who has been a member of the scheme for many years will have a different pension provision, and be subject to different rules and restriction, than someone who has joined the scheme more recently. These restrictions will also impact upon what is possible and available for the non-pension owning spouse.

At present Courts will consider the Cash Equivalent Value of pension benefits in determining who should have what. However, the CE value of a forces pension pot may not be a true reflection of its value. Our advice to clients is, invariably, that they need to obtain a Pension Sharing Report, often prepared by a actuary or pension expert in order to assess the true value of the pension benefits, including State as well as armed forces benefits, in order to determine a fair and appropriate division of the pension assets. The member of the pension scheme will often want to preserve as much of his or her pension as is possible, and this can sometimes be achieved by means of offsetting – giving the non-pension owning spouse more of the other available assets in order to preserve the pension benefit. However, these matters are complicated and it is vital that anyone, be they a member of the armed forces or their spouse, obtain expert advice upon this valuable asset.

By way of illustration, we recently obtained a Pension Sharing Order against a retired army officer’s pension scheme following a divorce in Germany. Both former Husband and Wife lived outside the jurisdiction of the Court, but the Court still has the power to give the former Wife a very significant portion of the pension asset. Effectively, this secured the former Wife an income for life, which was not dependent upon her former Husband’s survival and, for good measure, although she had never paid National Insurance in the UK, we also advised that she was entitled (because of her age) to a full UK State pension benefit, relying upon the payments made by her former Husband. The result, the client went from being wholly dependent upon the goodwill of her former Husband, to having an independent income of her own for life – well in excess of £20,000 per annum.

If you have the benefit of an armed forces pension, or plan to separate from a spouse who does, please, do not hesitate to contact us here at The Family Law Co in order to obtain expert advice upon the complicated area of armed forces divorce.