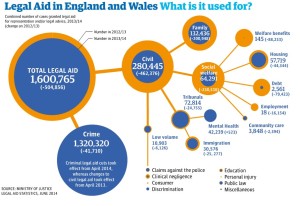 Swingeing changes to the way Legal Aid is made available to citizens of the UK have been in place for a year so we thought it was time to take a look at how those changes have had an effect.

Figures released by the Ministry of Justice from the past year’s civil justice reforms show how access to civil legal aid has dropped by more than half.

Indeed, the figures show how in some categories of law state funded legal support has become almost impossible to obtain.

The changes were brought about when the Legal Aid, Sentencing and Punishment of Offenders Act 2012 (LASPO) was introduced in April 2013.

The impact of the act is now being looked at by the Justice Select Committee, but early figures show dramatic changes have already taken effect.

In the last year we’ve had first-hand experience of these changes, with family law one of the most severely affected areas of law. The number of people involved in family law cases who are eligible for legal aid has dropped by 60 per cent in the last year.

While family law has been badly affected by the changes other areas of civil law have been completely take out of the scope of legal aid by the act and others must meet certain criteria on a case by case basis to qualify. Categories no longer eligible for legal aid include:

Family cases involving no proof of domestic violence, forced marriage or child abduction (As a result two thirds of cases in family courts now involve somebody representing themselves).

Housing and debt matters unless they constitute an immediate risk to the home.

Employment cases not involving human trafficking or a contravention of the Equality Act 2010.

On top of these issues the government also intends to make significant changes to criminal law, with the budget for criminal legal aid set to be cut by £215m.

The full government statistics on legal aid from the last year can be seen here. 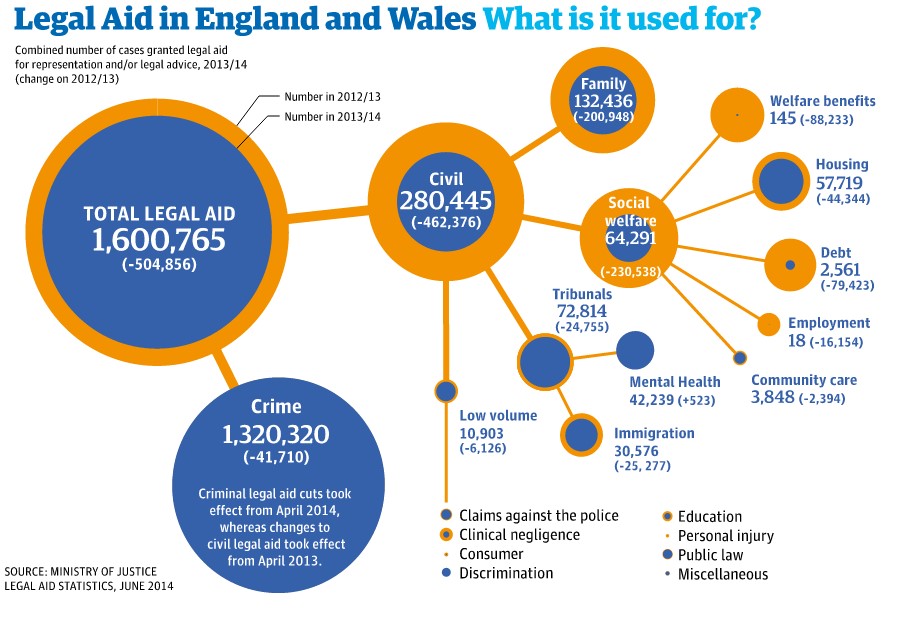