Grandparents play an important role in the life of their grandchildren and are often central figures in forming the individuals those grandchildren grow up to be.

Despite that many grandparent aren’t fully aware of their grandparents rights, which is why we’re always keen to raise awareness of the issue.

Hollywood legend Jack Nicholson was raised in Jersey by window dresser John Joseph Nicholson and beautician Ethel May, along with his sister June.

It wasn’t until after both his sister and mother had died that Jack learned his sister June was really his mother, and his mother was actually his grandmother.

His maternal grandparents had taken the decision to raise him as his own because there was uncertainty over who his father was, either Italian American showman Donald Furcillo – who committed bigamy in marrying 16-year-old show-girl June – or Latvian born Eddie King, who was June’s manager.

In this case the grandparents had no rights to exercise Parental Responsibility for Jack Nicholson, as these would have been retained by his mother, June.

Parental responsibility means the grandparents can take on the role of a parent enabling them to give legal consent to day to day issues but in terms of major decisions (such as medical treatment, schooling and marriage) the parent’s  consultation is needed as parental responsibility is shared, and if a dispute arises a court would need to decide.

In contrast a special guardianship order would give the grandparents ‘super parental responsibility, meaning they can override the parents’ views.

All grandparents dream that their offspring’s offspring will grow up to be a president or prime minister, and in this case those grandparents saw that dream come true.

Obama lived with his grandparents from the age of 10 until the time he went to University, choosing to live in Hawaii rather than in Indonesia with his mother and her second husband.

No child really has the right to choose to live with their grandparents, unless this is done with the agreement of all the family and provision is put in place for the grandparents to exercise Parental Responsibility, which is very similar to the situation above for Jack Nicholson.

Barack Obama wasn’t the first president of the USA to be raised by his grandparents, as his democratic predecessor Bill Clinton grew up with his grandparents Eldridge and Edith Cassidy following the death of his father. 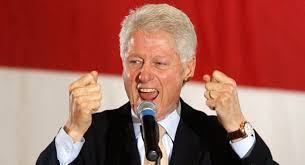 His mother, Virginia Clinton, elected to move to Arkansas and study nursing following her husband’s death and the Cassidys took care of young Bill Clinton for four years, while running a small grocery.

Clinton credited his grandfather, who extended credit to black people in his store at a time when many stores wouldn’t even allow black people inside, with helping to form his outlook on life and views on equality.

Given the short period of time, i.e. four years that Bill Clinton lived with his grandparents, delegation of Parental Responsibility would have been the appropriate response.

Guitar legend Eric Clapton had a similar upbringing to Jack Nicholson, as he grew up without knowing his 16-years-older sister Patricia was actually his mother.

Clapton was raised by Rose and Jack Clapp, who bought him his first electric guitar, and who took care of him following his sister’s affair with a married Canadian soldier during World War II.

At the time having a child out of wedlock, or at such a young age, was considered a major scandal.

In this day and age people recognise that it is not such a scandal for a young  teenager to have a child and people now realise that it is  best for a child to be brought up by its parents where at all possible, or if not, then family members.

The same response would apply in terms of Parental Responsibility, Child Arrangements Orders or indeed Special Guardianship Orders, depending on how involved Patricia was going to be with her son.