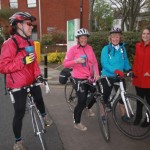 Luckily, after a week of rainfall, the weather turned out to be on the sides of Julia Clayton, Jacquie Spragg, and Emma Thomas, as they embarked on a 35 mile bike ride in preparation for the 200 mile bike ride across France, which both Julia and Jacqui will undertake in June of this year.

Julia Clayton, a Director at Hartnell Chanot and Partners, and Jacquie Spragg, a self-employed Guardian, will join 48 other cyclists in a 200 mile cycle ride in France, over a period of three days, all in aid of the ‘Who Cares Trust’, a charity dedicated to helping the lives of those children who sadly end up in the care system. As part of this enterprise, each individual cyclist aims to raise £600, which if successful, will mean the bike ride could raise in excess of £30,000. All of this money will go towards helping the lives of some of the country’s most vulnerable children.

On Friday 20 April as part of this fundraising, and as a little ‘taster’ of what is to come in France, Julia and Jacquie, with the help of Emma, cycled from Torquay to Exeter, via the Teign Valley, a total of 35 miles. Along the way they stopped at a number of local businesses, who were there to show them their support and make donations towards the charity. As part of this fundraising a number of solicitors firms partook in a ‘dress down Friday’ as a means of raising money, including Hartnell Chanot and Partners, Torquay based Woollcombe Beer Watts and Exeter based solicitors, Cartridges. Donations were also received from Wollen Michelmore in Torquay, Stephens and Scowns, Tozers and CAFCASS, with a fantastic total of £452.80 being raised.

After one tumble, one puncture and one brake failure, the cycling trio couldn’t have been happier with the fantastic support they received throughout the day, a boost which is certainly most welcome, as they now prepare for the mammoth task ahead.

Speaking about the fundraising and the charity Julia said: “The aim of the cycle ride on Friday, was not only to help raise money for the charity, but also to encourage other local professionals who represent parents and children in care proceedings to get involved in further fundraising.”

Determined to raise in excess of the £600 set per person, Julia and Jacquie will be holding a skittles evening on the 18 May 2012. Local businesses have kindly donated prizes which will be auctioned off during the evening, and all money raised will go towards their fundraising goal.

However, at Hartnell Chanot and Partners our charitable efforts don’t end there. Last week, 25 year old trainee solicitor Harriet Jones, took to the streets of London, as she completed the London Marathon in aid of the Stroke Association, raising in excess of £2,000 for the charity. Although a challenge that she told herself she would never do again as she crossed the finish line, it seems one week on she has changed her mind, and has already applied for next year’s London marathon!